Hey gang. FYI, Brian Schmoyer - late of the infamous "The Only Thing I Know" video, has turned a conversation he and I had into a nifty podcasty thing on ScrewAttack. Have a gander:

I try not to post anything here but episodes, but this was too cool not to share. This HUGE paper-mache (I think) art installation by students from Holten Richmond Middle School is on display at the Liberty Tree Mall in Danvers, Massachusetts from April 8th to 30th. Take a look at this, it's pretty damn cool: 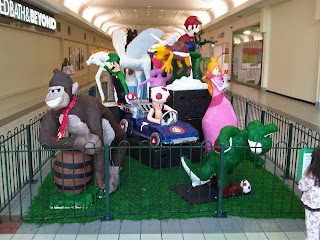 There's actually ANOTHER huge display behind it of "Clash of The Titans," which I'm gonna try and get some snaps of for the other blog tommorow. What's kinda cool is that it looks to be based off the ORIGINAL "Clash." Either way, it would appear Holten Richmond employs the World's Coolest Middle School Art Teacher... 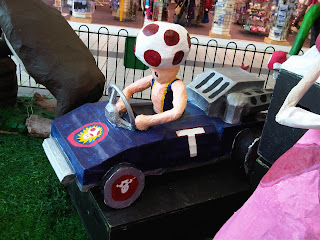 What trips me out about this is the realization of how... "ingrained" the Mario Arcana has become in the pop-culture, a far cry from how "niche" it was for most of when I was the age of the kids who made this: Mario, Luigi & Peach? Okay, makes sense. Toad? Wow. Toad in a Mario Kart?? Whoa. 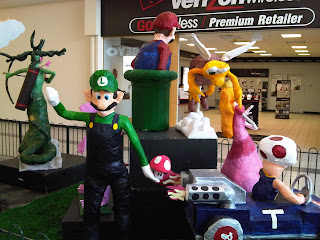 I love the Paratroopa. From the "front" shot at the top, you can see that Yoshi and Donkey Kong also made the cut. But imagine my surprise when I walked to the rear of the piece and saw... 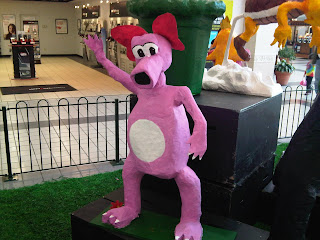 BIRDO?? Birdo is fair-to-moderately obscure, at least compared to everyone else in here... or "she" has always seemed to be. Is the "Mario Crew" so ubiquitous now that even Birdo gets the "go ahead" for a project that (presumably) had to work from some kind of group consensus? That blows my mind. I remember trying to do Mario/Nintendo/game-inspired stuff in school art projects as a kid and either being voted down or told that it wasn't a "proper" subject for school. Having something like THIS be a class project - the type that gets shown in a big public space like "the" local mall? My recollections of school would be soooooooo dramatically different if something like this had been on the docket then. What a cool thing, and what a bunch of obviously-talented kids.

The installation is up at the Liberty Tree Mall in Danvers, MA; apparently from April 8th to the 30th. If you're in that area, give it a look. How often do you see stuff like this, right?
Posted by MovieBob at 1:10 AM 9 comments:

Where the Real World meets The World of Games, confusion reigns and conflict is innevitable.

One Man is charged to maintain the reason and hold the balance...

He is... The Game OverThinker!