(Oh, by the way, have we all seen the NEW EPISODE?)

So, the secret is out: THE ESCAPIST let me try my hand at game reviews for SUPER MARIO 3D WORLD. You can find the full text-review HERE, below is the very purty video supplement The Escapist's video guys helpfully put together using my less-than-purty vocals:

A few days overdue. Couldn't be helped, but I hope you find it worth the wait:

Because Twitter is weird about animated-gifs, here's a short lo-res FX test for some new Storm Trooper/Putty Patrol type guys for upcoming episodes. At this point, they don't have official names.

Incidentally, something that's not fun? Making reflective-surface work on a greenscreen set. Hence why the guys in the rear have more a flatter matte-finish on their non-faces (foreground guy was shot far enough from the screen to not reflect it directly.
Posted by MovieBob at 7:55 PM
Just A Test
2013-11-10T19:55:00-08:00
MovieBob
Comments

Me and The Most Dangerous Woman In Video-Games, shortly before a presentation (hers) in Boston. Hat-tip to my friend Monica for snapping the photo: 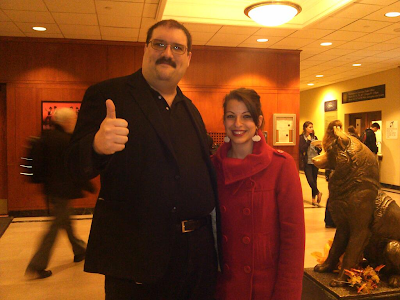 Where the Real World meets The World of Games, confusion reigns and conflict is innevitable.

One Man is charged to maintain the reason and hold the balance...

He is... The Game OverThinker!